View Profile
Ever since Salman Khan stormed into the sets of Chalte Chalte way back in 2003, the whole ordeal culminated with the untimely withdrawal of the movie's original actress, Aishwariya Rai. Since then, Aish and Shahrukh have never really seen eye-to-eye. Quite obviously, Salman was successful in his approach, forcing SRK to resort in roping Rani Mukherji to star opposite him instead.
But we now hear that Aish, being her charming and sociable self, is trying hard to bury the hatchet with 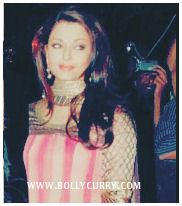 Bollywood's King Khan. After all, who would want to remain in the bad books of one of the most influential people of B-town?
At SRK's celebratory bash for Karan Johar's 39th birthday, the guests saw the unexpected entry of Aishwariya with husband Abhishek, although pretty much past midnight. Sources claim the appearance of the star was mainly to oblige SRK's invitation, and not just to pass on her good wishes to KJo. For quite a while, Aish has been showing her presence (although for a few moments) at SRK's bashes.
News has it that Aishwariya is keen on renewing her friendship with Shahrukh for reasons more than one. Aish has a limited set of choices as far as her hero's are concerned. Quite naturally, starring opposite Salman is something she's chosen not to do, and with Aamir being a good pal to Salman doesn't help Aish bag a film opposite the perfectionist either. With relations with SRK also being hostile, the diva is left with only a handful of contemporary actors or the newer generation of the film industry, thus striving herself to get into the good books of SRK!
Here's hoping Aishwariya succeeds in her mission!