Plans are afoot to bring Aishwarya Rai and Meryl Streep together in an American production of 'Chaos', Colin Serreau's 2002 French movie.

Says a source, 'They ran the concept with Meryl and Ash and they were g 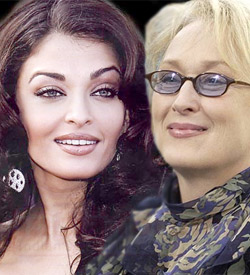 Featured Video
ame. They need to Americanise the theme because 'Chaos' was a very French movie. But, yes, in principle Ash is on for this film.'

Ash is slated to play a sex worker in the film.

Another international project Aishwarya has agreed to is Roland Joffe's 'Singularity' with Brendan Fraser.

Ash says she has asked for the final draft of the script. 'Now the time factor has to be worked out. The time they want is devoted to Mani (Ratnam) Sir's project. New dates have to be worked out. There're so many projects that I want to do but because of the dates or a delay I can't. There're only that number of assignments I can take on. I've never done more work than I can do. I never can.'

In the meanwhile, Aishwarya gets ready to shoot for Shankar's 'Robot' and Mani Ratnam's film with Abhishek.

'There has been a little delay in Shankar's 'Robot' because of his writer Sujata 's death. That has delayed 'Robot' a bit. All kinds of rumours have been floated about the project. The dates situation does get tighter for me because I was supposed to shoot 'Robot' now and Mani Sir's film a little later during the year. We just have to work under a tighter schedule now.'