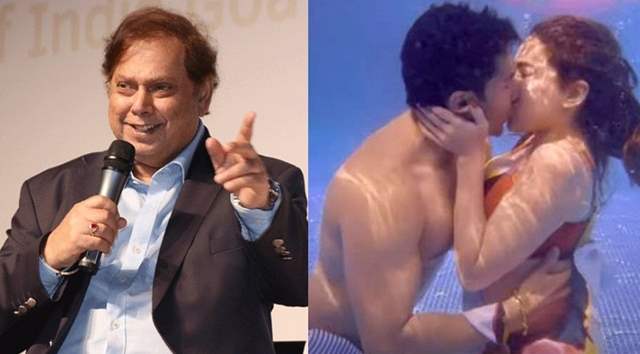 Varun Dhawan and Sara Ali Khan's latest release, Coolie No.1 failed to win the hearts of the audience. The film got a poor rating across all movie reviewing channels. However, despite it's poor rating the film has been making a lot of headlines for the main lead, Varun and Sara's kiss!

Recently, David Dhawan who is the director of the film which is a remake of the 1995 film with the same name starring Govinda in the lead role along with Karisma Kapoor, has opened up about the most talked about scene of the film, the underwater kissing scene between the lead pair.

In a recent interview, David was asked about the kissing scenes he had to film with Varun. He said it not a difficult task as they had a professional attitude while filming it.

There was nothing difficult about it because we are very professional people. When I am shooting with him, I don’t look at him or ask him whether we should do this or not. I tell him that this is to be done. The script demands a kissing scene and so we have to do it. Practically, there is nothing wrong. Kissing scene is the lightest scene in the Indian films these days. It’s very fair when you are doing it professionally, you don’t look left, right, centre. ‘Arre yaar mera beta karra hai, sharam aarai hai. Kaae ki sharam aarai hai? (Oh no, my son is doing it, I feel so embarrassed. What are you embarrassed about?) There is no such thing. It’s all practical today. Now how the hero and the heroine do it is up to them