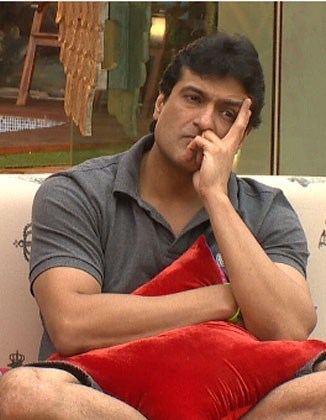 Entertainment, Entertainment and only Entertainment! This  statement fits the popular reality show Bigg Boss Saath 7 that airs on Colors. Everyday viewers get to see something new happening in the house and also among the contestants too, a friend becomes foe and next moment is a friend again. There are lots of fights and drama too. However the show has become an addiction for the regular viewers of  this show, as it is grabbing the eyeballs of the viewers through its concept.

Similar to the last season of the reality show which had a freeze task where the loved ones of the contestants entered the house to meet them over a freeze task, today something similar happened in the show. Yesterday we had reported about the new entries namely Nigaar Khan, Payal Rohatgi, Dolly Bindra, Yogendra Dutt, Andy's mother and Kamya's mother who were to enter the house during the freeze task to meet their most loved contestants and share some time with them.

But well as we see that nobody from Armaan Kohli, Tanisha Mukherjee, Kushal Tandon, Ajaz Khan and Sofia Hyatt's house came to meet them. Out of these contestants we have seen in the previous episodes of the show that Armaan Kohli has a special bonding with his parents and more so with his mother. He seems to be a typical Mumma's boy if we listen to the very many times he has spoken about his mom, Nishi Kohli.

Well definitely it is one's personal choice to enter the show or not, but we wonder since it was just a matter of few minutes she should have gone and met her son.

We had recently seen in one of the episode of the show that when Kushal Tandon re-entered the Bigg Boss house, Nishi Kohli had sent a message through Kushal to pass it on to Armaan. When Kushal gave the message that his mother sent for him, he became too emotional and started missing his mother even more.

Don't worry Armaan, it is just the matter of one more month in the house and then you can be with your mom again!

+ 5
7 years ago Obviously she won't enter the house. What mother would appreciate seeing her upbringing go down the gutter? Given his behavior, it's obvious that his mother is ashamed of him and would want to keep away from the drama.

NeemTree 7 years ago awww sad to hear that..
hope armaan will meet her mother
but it is unfair

sanuchopra 7 years ago If kushal said something wrong den i m 100% sure she will came d defend herself. Now she is nt coming dat means what kushal said about andy all r truth

7 years ago i m sorry but even with all this BB7 is not entertaining atleast to me...

7 years ago b'cos she cannot say that salman khan was lying..:P

+ 5
7 years ago How would she come after saying two different things to Kushal and Salman?

+ 4
7 years ago We are saying no to Armaan in the Bigg Boss House too. What a immature human being !!!