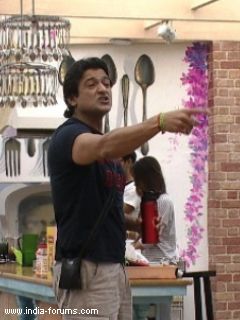 Violence has been a big part of the current season of Bigg Boss 7 and it comes to us as no surprise that actor Armaan Kohli has been arrested today by the Lonvala police.  Sofia Hayat after having come out of the house last to last weekend, had filed a case against Armaan for having hit her with the broom - footage she claimed was never aired on national television.  And it now looks like Sophia's prayers have finally been answered as the actor has been found guilty and arrested by the Lonavala police.
We hear that the police checked the CCTV cameras in the house and after having seen the footage of the fight between Armaan and Sofia, decided that Armaan had indeed been violent towards Sofia.  We wonder now whether Armaan will be allowed to continue till the finale?
If fans remember Kushal Tandon too had been violent with VJ Andy after which he had been removed from the house and his girlfriend Gauhar Khan too had walked out in support. However, since Andy was always in the house he never got the opportunity to file a case against Kushal and hence did not face ramifications as the actor was after a couple of weeks called back into the house.  We wonder whether this season is really hyping up the troublemakers quotient?
For now it looks like its going to be a battle of Big Boss versus the Indian police! Lets see whether the actor remains locked up in the police station or in the Big Boss house for the next couple of weeks.

taz15 7 years ago Armaan Khoi is a muppet! He's had a tiff with all the housemates atleast 1. Bare baap ki bigri hui bate!!!!! And the most annoying thing is salman says nothing! but kushal or gauher do something toh khair nahin, salman shreds them to pieces! Why because kushal and gauhers family isn't influential ppl?? That there tv actors or beginners??? Love salman great humour but he's being bias towards kholi and Tanisha and super unfair too kushal and gauher!!

sxy_angel1 7 years ago kushal and sophiya case are different...kushal got punished by bb when he was violent but tanisha and arman are getting special previelage even after being physical wid housemates many times :/

7 years ago hypocrite India and its justice system . it chooses to
shun an Indian girl being harrased on a train but when
a British Asian wannabe singer / actress complains it
gets registered and how quickly its being heard in
court.
if it was about justice then I would have had no
problem, but this is not for justice but publicity.
I don't like armaan, just seeing his face pisses me off
but so does Sophia's face.

I wonder what the the people on here would say should Andy file a similar complaint against kushal. but then Andy wouldn't want do unnecessary publicity stunt.

7 years ago Kudos to sofia for showing this much courage!! The show is so much biased towards Armaan n tanisha..!! Nver has armaan been scolded from salman..!even the footage of hitting sofia wasnt shown on television..! dis season simply sucks..!

7 years ago No one dared to do what sofia did. Hats of

7 years ago dafa hu dog apni bitch tanisha k saath
this season i must say due to tanisha salman bht bad show hua i dnt like salman as host and bb next season mat aao cheater .

+ 3
7 years ago Hats off Sofia.. U showed Armaan his real place! Such a cheap guy :@
Now I want ANDY to do d same wid Kushal... this immature stupid guy needs to learn a lesson too!!

7 years ago buddha gaya jail mei..if this is indeed true then I will be able to enjoy BB7 freely after weeks..now its time for the buddhi tanisha to move out..she is another annoying thing trying to play really smart

+ 5
7 years ago Happy that he is out of the house
just watched few times BB and hated him a lot, he really doesn't have respect for others