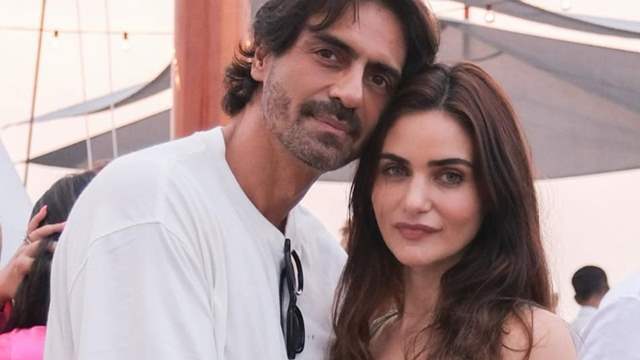 On November 26, Arjun Rampal turned a year older, and his social media account  was swamped with adorable wishes for the actor.  Myra Rampal, his daughter, and Gabriella Demetriades, his girlfriend and others also posted beautiful images and videos on Instagram to wish the Om Shanti Om actor.

As part of Arjun's 50th birthday celebration, his girlfriend Gabriella also threw a wonderful yacht party, which was attended by his close friends and family.

Sharing the pictures from the yacht party, Gabriella Demetriades wrote, “I’m only throwing parties on yachts from now on . Thank you to all of our loved ones for being there.”

The first picture shared by Gabriella shows her and Arjun posing together. While Arjun can be seen dressed in a white tee, Gabriella opted for a pastel green cutout dress. The second picture shows the Daddy actor enjoying a motorboat ride with a few of his friends. In the next picture, Arjun can be seen dancing his heart out with friends on the yacht, and all of them are dressed in white. Another picture shows Arjun and Gabriella’s 3-year-old son Arik Rampal while the rest of the photos feature Gabriella and Arjun having a fantastic time with their pals, with one one featuring their 3-year-old son Arik Rampal.

On the work front, Arjun Rampal’s last film was Dhaakad. He also starred in The London Files, a Voot web series that was released in April 2022. Arjun has a busy 2023 lineup and will feature in mega-movies like The Battle of Bhima Koregaon and Hari Hara Veera Mallu, the latter being his Telugu debut.