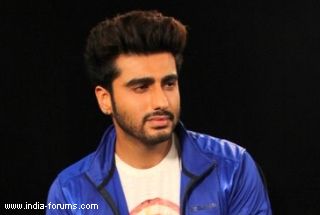 Is Arjun Kapoor giving the nod to a movie adaptation of Chetan Bhagat's "Revolution 2020"? The young actor prefers to stay mum as long as the makers make an official announcement.

There's buzz that after delivering a hit with "2 States", an adaptation of Bhagat's bestseller "2 States: The Story Of My Marriage", Arjun has been approached for the onscreen version of "Revolution 2020", to be helmed by Rajkumar Gupta.

Asked about the prospects of signing on the dotted line for the project, Arjun told IANS: "I have to meet Rajkumar Gupta and Siddharth Roy Kapur, so I look forward to meeting them soon. When there is something official to speak about, they are the ones who should talk about it. Producers should announce it, not actors."

But are you keen?

"Again that's something individual and personal," said the tall and handsome actor, who has vowed the audience with his work in films like "Ishaqzaade", "Gunday" and "2 States".

The book "Revolution 2020" is a love triangle set against a backdrop of corruption.