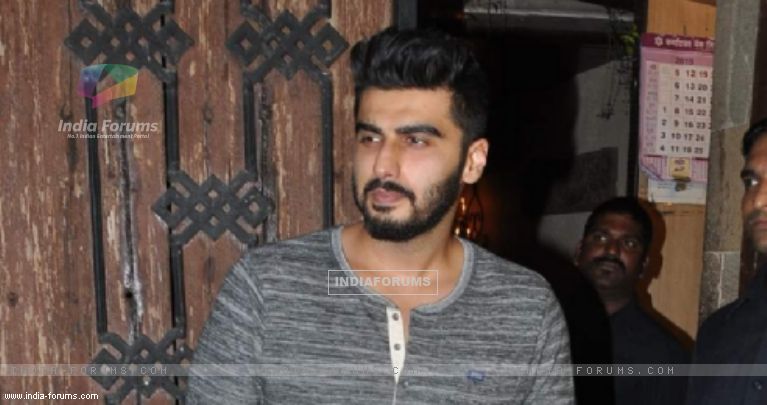 Actor Arjun Kapoor would be seen flaunting his cooking skills in an episode of TV show Farah Ki Daawat. He says that he is learning to cook 'Jungli Mutton' for his future wife.

Arjun was seen sporting a scruffy look while he was cooking alongside show host Farah.

While preparing the dish, Farah commented that Arjun is learning to cook Jungli Mutton, so that he can satiate his foodie spirit while he is abroad.

To which, the "Ishaqzaade" actor responded that he is not going to eat this Jungli Mutton while he is abroad, but is learning for his to-be wife.

Farah asked the 29-year-old actor about how should his to-be wife be?

According to a source, the actor replied that "she should be extremely fond of food but most importantly understand the life in the Indian film industry, so it would always be better if she's from the industry".

"This episode will be a proof of my cooking prowess, so whenever a proposal will come for me, my grandma can show this as proof that I can cook," Arjun added.

"Farah Ki Daawat" offers homegrown recipes and insights from celebrities from different walks of life about their food habits, cooking skills and much more.

The episode of the Colors' show will air on April 26.

+ 3
8 years ago Why is this female hell bent on going Nude ? who is interested to watch her anyway... What a cheap publicity stunt..

8 years ago @ nicko787
Surely you mean 4th partner, have you forgotten about Piggy Chops???

AnywayZ, what goes on in other peoples bedroom is their 'Affair'!.

+ 10
8 years ago Okay,IF, Dont you have any other work posting shameless articles about characterless people?
This is not our 'India' and This is supposed to be a website for clean indians

+ 3
8 years ago @ nicko787
and u r trying to prove yourself their biggest hater who is jealous of dis success.

ManjunathBlore 8 years ago @..KaJenDelena..Why r u so angry? btw, No body is forcing you to show ur body. I don't think people r queing up to see u like that. She has it and she flaunts it and we see it. It is none of your business. Who r u to call the people who watch as lusty. As if you r the sole moral guardian on this earth. All those who have seen her pic after KKR win, please visit twitter 'pic.twitter.com/SfyLvKJ8'. You get to see. Now I know all those who talk about morality will queue up to see her pic. Hypocrites.

+ 4
8 years ago ewww how very cheap and plain disgustingly nasty.

+ 6
8 years ago we should throw out this type girl from our country.i can't understand what she think about herself.looking like sick n idiot .
n why she use SRK name to get cheap publicity.