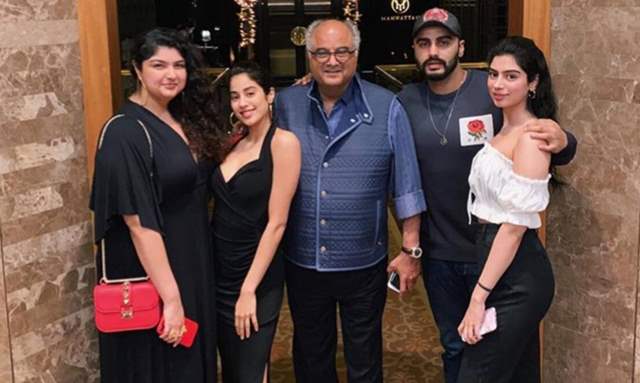 Arjun Kapoor shares a close bond with his family and during a recent interaction he said that he understands why his father Boney Kapoor fell in love with Sridevi, he can't say what happened to his family at that time was 'okay'.

In an interaction with Film Companion, Arjun credited his 'mother's upbringing' for the way in which he handled the complicated situation after Sridevi's death in 2018. He decided to stand by his father's side in the moment of grief, thereby rebuilding his relationship with him, and forming a new one with his half-sisters Janhvi and Khushi.

He said, "My mother's upbringing came in my head. She would've told me to be by my father's side regardless of what obstacles we face, because of a choice he made where he fell in love. And I respect my father for falling in love again. Because love is complex. And we would be silly and churlish sitting here in 2021 saying that you only fall in love once. It's very Bollywood-ised. Love is complex, love is complicated, love isn't always about being in love."

He further continued that it is about compatibility and mentioned that one can fall in love again, and that needs to be understood. Referring to Boney and Sridevi’s marriage, Arjun said, “I don't agree... I can't say I'm okay with what my father did, because as a child I felt the repercussions, but I understand it. I can't say 'theek hai, hota hai (It's fine, these things happen)', because I will always wonder. But when I rationalise it as an older person who's dealing with his own relationship highs and lows, you understand.”

He also mentioned that he can imagine his parents having gone through certain things that led to the separation. He said, "You try and be a good son, because that's what my mother would want."

Recently, Arjun Kapoor shared an endearing post for his mom, Mona Shourie on Instagram just a day after the world celebrated Mother’s Day (May 9). It has been 9-years since her sad demise, and Arjun says he still feels lost without her. The Sandeep Aur Pinky Faraar actor had shared a throwback picture with a note.

+ 7
4 months ago Even school-going kids have better grammar and do a better job at proofreading before publishing articles, India-Forums! Seriously, not cool.

4 months ago Love is complex, love is complicated, love isn't always about being in love."👏👏