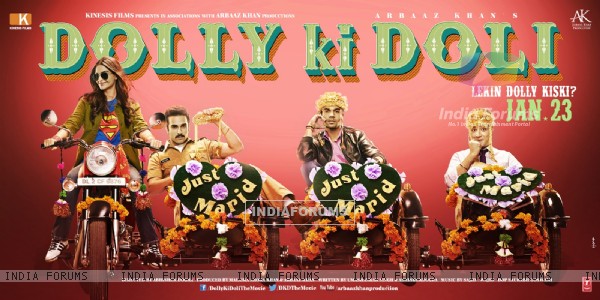 One of the most anticipated movies of 2015, Dolly Ki Doli is going to kick-start its promotions on 8th December, 2014! Interestingly, it coincides with the movie's producer Arbaaz Khan's mother's birthday. Producer Arbaaz Khan feels that his mother Salma Khan's birthday is lucky for him, and hence has decided to start the promotions of one of his biggest projects on 8th December.

After a royal misfit in Khoobsurat, you will get to see Sonam Kapoor as an unconventional bride in Dolly Ki Doli! A bride in a lehenga sporting a pair of sneakers, jacket and boots topped with an alcohol bottle in her hands, Sonam Kapoor has definitely taken the audience by surprise with the first look of Dolly Ki Doli!

A source close to Arbaaz Khan says, "The entire Khan family is very close, and they consider their mother's birthday a very special and lucky day for them. Arbaaz sir has also worked very hard on this movie, and is very special to him. Hence what can be better than kick starting its promotional campaign on his mother's birthday!

Well, after the million eyeballs that the first look of Dolly Ki Doli has grabbed, one cannot wait to catch more glimpse of the film.