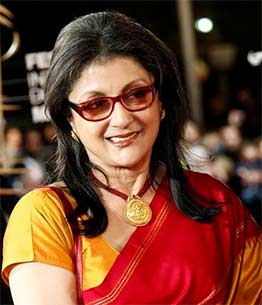 "I don't know why it isn't so...maybe people don't know the procedure," Aparna Sen said during a session at the maiden Kolkata Language and Literature Festival.

"There are some co-productions but then there are rules which have to be followed."

Sen also said the political tensions in the neighbouring nation has affected the film industry.

"Their film festival was cancelled because of the political issues...I was scheduled to go there, but couldn't," she said.

Khushi388 4 months ago Recently I watched the Basu Poribar Bengali family drama trailer online on ZEE5, I liked this trailer and excited for the movie. Starring Soumitra Chaterjee, Aparna Sen, Jisshu Sengupta, Saswata Chatterjee, and Rituparna Sengupta. On the 50th wedding anniversary of Mr. and Mrs. Basu, the whole family decides to gather at their ancestral mansion. However, the reunion uncovers the family’s long-buried secrets, leading to unforeseen consequences. Coming soon.

Amanda Seyfried Announces The Birth of Second Baby
55 minutes ago

NCB Dismisses Rhea's Claim of 'No Jurisdiction in Drugs ...
56 minutes ago