View Profile
The latest rumors floating around Bollywood are about Anushka Sharma supposedly stepping into the shoes of Deepika Padukone - or more precisely, into her character's shoes! 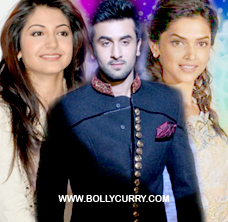 According to sources, the Band Baaja Baraat star will be seen in the lead role opposite Deepika's ex Ranbir Kapoor in director Ayan Mukherjee's upcoming project. If the buzz is to be believed, this role was initially meant to be Deepika's. However, her break-up with Ranbir, and his subsequent link-up with Katrina Kaif (and miscellaneous others at that) has given way to Anushka bagging the role. Despite, as you may remember, repeated claims of this ex couple in having no qualms for a common project!

Apparently, Dippy was not the only one of Ranbir's girls suggested for the role; there was also Katrina Kaif. But neither of them has ultimately been signed. When Karan Johar was contacted, he said that besides his being producer, nothing about the movie has been confirmed.

Speculations much, sure! Still, Ranbir-Anushka vs Ran-Deep - your take is?