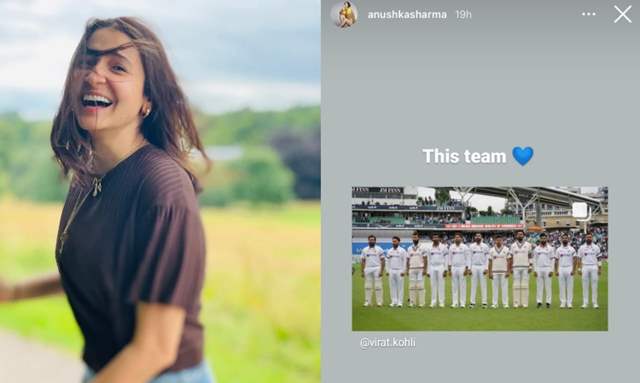 Actor and the wife of India captain Virat Kohli, Anushka Sharma, celebrated the team's victory over England on Tuesday. Anushka Sharma shared a post by Virat Kohli on Instagram Stories. "This team," she wrote, followed by a blue heart emoji.

Cricketer Virat Kohli took on Instagram and posted a series of photos with his teammate post-match and captioned the images; Tough situations build strong people. Onto the next one. #TeamIndia ????".

India defeated England by 157 runs on Monday, taking a 2-1 lead in the ongoing five-match series. The victory came on the final day of the fourth Test at Kennington Oval. This is also India's first Oval victory in 50 years.

Anushka is currently in England with her daughter Vamika after accompanying Virat to the country in June. Anushka spends a lot of time with Virat's teammates and their partners.

Anushka and Virat are also very active on their social media accounts sharing pictures and daily glimpses straight away from London. They have also been trying out new restaurants. Recently, they went to Bundobust, an Indian street food restaurant in Leeds. The couple also enjoyed the food at Tharavadu and a vegan restaurant.

Talking about work, Anushka was most recently seen in Aanand L Rai's Zero. The film was released in 2018 and starred Shah Rukh Khan and Katrina Kaif. She has completed a few digital projects in the last two years, including Paatal Lok on Amazon Prime Video and Bulbbul on Netflix. She is also producing Qala, in which Irrfan Khan's son Babil Khan will make his acting debut.