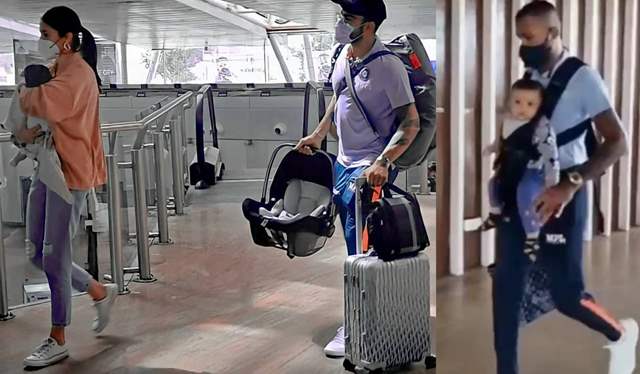 Indian Cricketers Virat Kohlin and Hardik Pandya were spotted with their darling wives and kids at the Ahmedabad airport as they were heading to Pune and then were also spotted at the Pune airport upon arriving.

As reported earlier, Virat and Anushka became proud parents to a baby girl whom they have named Vamika. The celebrity couple welcomed their princess on January 11, 2021, and soon after her birth, the stars decided to keep their daughter away from the media glare and hence requested the media and the paprazzi to refrain from clicking their daughter's pictures.

They sent out their requests in a very beautiful and classy manner. They had sent out goodies and personalized note to the photographers after the birth of their little angel and candidly requested them to not click pictures of their daughter Vamika. The shutterbugs too obliged and accepted their request.

But, now few videos and photos of Virat and Anushka from Ahmedabad airport have made their way to the internet. A few fans of the couple created the videos and posted on social media.

As known to all, Virat Kohli headed to Ahmedabad to play a series against England and his wife Anushka and baby daughter  Vamika too accompanied him for the same.

In the photos and videos that have gone viral on the internet, we see Anushka cradling her baby. She has made use of a stole to keep away from all the hidden cameras and fans trying to capture them.

In another video, we see Virat carrying his little princess in a cradle. Following them are Hardik Pandya, his wife Natasa and their baby Agastya.

Here are a few photos and videos of the two families with their little ones: