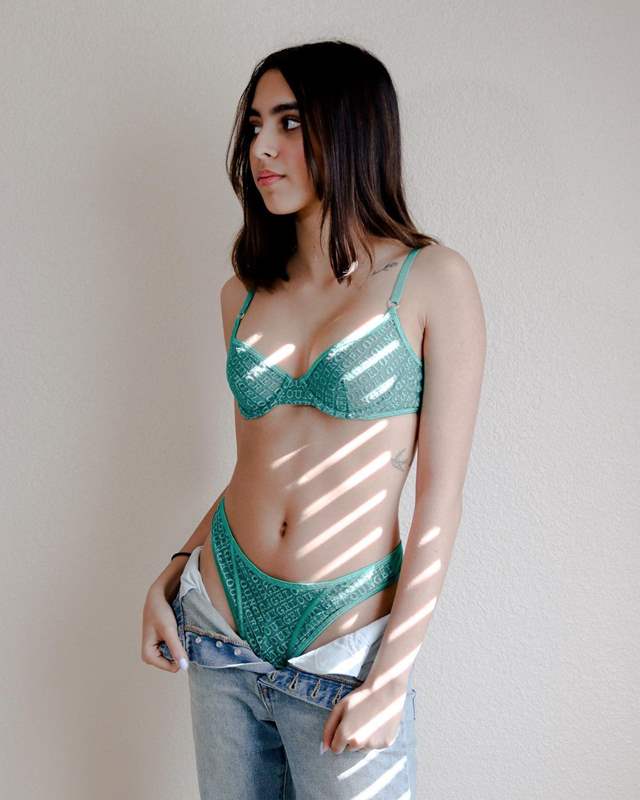 Filmmaker Anurag Kashyap’s daughter Aaliyah Kashyap has been making headlines for a long time now. The young diva who is said to be residing in the LA is leaving no stone unturned flaunt her hot and sexy avatar and has been treating her massive fan base that she has on the social media with some super hot pictures of herself.

This time, she posted a photo of herself posing in a sexy lingerie and flaunts her perfect curvaceous body by rolling down her denims. The star kid is setting the screen on fire in the hot photo shared on her Instagram.

In the picture, Aaliyah is wearing turquoise blue lingerie. And, her laced lingerie makes her look smoking hot. Kashyap has also worn blue pants, with her lingerie.

For the camera, Aaliyah had lowered has unzipped her pants. She flaunts her sexy lingerie as she poses holding the unzipped flaps of her jeans. Aaliyah is striking a pose, facing one side. Kashyap has left her short hair down and has kept her makeup minimal.

Meanwhile, Aaliyah Kashyap shared the picture, with the caption, “just posted a try on haul with @loungeunderwear on youtube! Go check it on Link in bio.” She shared a YouTube link with her post and asked her followers to check it out!

Nevertheless, Anurag Kashyap’s daughter is making a statement with her bold and beautiful photos. Apart from that, Aaliyah recently shared a picture of her exchanging a steamy kiss with her boyfriend Shane Gregoire. They shared a sizzling lip kiss in front of a Christmas tree.

This ain't the first time when the celebrity star kid has set the internet blazing with her hotness. A few days back too, she dropped some eye-catching photos of her wearing sexy lingerie. A few of her posts also got comments from Boney Kapoor and Sridevi's daughter Khushi Kapoor and many other celebs.