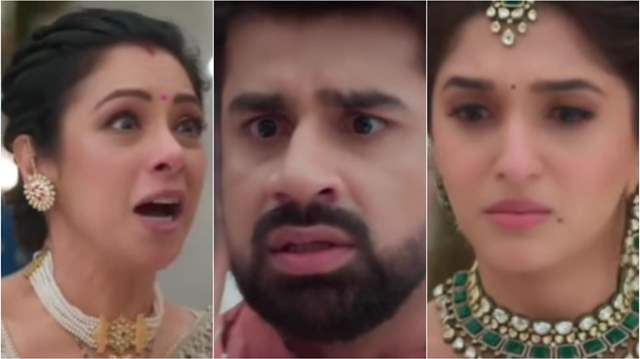 Star Plus show ‘Anupamaa’ is getting quite interesting with each episode. The current track of the show revolves around Paritosh’s fling being exposed in front of the family. Anupamaa believes that it is better that Kinjal learns about the truth before it’s too late while Rakhi didn’t want her to reveal the truth.

In the upcoming episodes, Paritosh continues to state that it isn’t a big deal as man often do this and it’s not the first time that something like this has happened. This leaves everyone shocked and appalled. Anupamaa tries to school him but Toshu remains adamant. Anuj and Vanraj side with Anu and call out Toshu’s wrong doings.

Toshu gets defensive and asks Kinjal to not listen to Anu as she wants to break their relation. Kinjal lashes out at Toshu and asks him if he will be fine if asks him if he will be fine if she also goes to have a fling and extra-marital affair. Toshu shouts at her. Kinjal asks him to not raise his voice. Kavya questions Rakhi for keeping mum and not exposing Toshu. Rakhi states that she will not understand as she isn’t a mother and she is the one who came in between Vanraj and Anupamaa.

Furthermore, in the upcoming episodes, Kinjal decides to leave Toshu but Vanraj throws him out of the house. Toshu gets furious and tells Anupamaa that he will never forgive her for the same.

+ 7
2 months ago the show seems to be picking up.. might check it out again

2 months ago Why should kinjal stay in Shah house ? The answer is because its tvseries and then they will bring back Toshu like they brought vanraj back and show aperfect family 🤦‍♀️🤦‍♀️.

+ 3
2 months ago Wait so that means Kinjal ISN'T leaving Shah House? Dear God she really will be Anu 2.0 then

+ 4
2 months ago It will be better if this goes balika vadhu way, kinjal getting married to someone else and toshu suffers just like jagya, after enough torture new entry for him as well