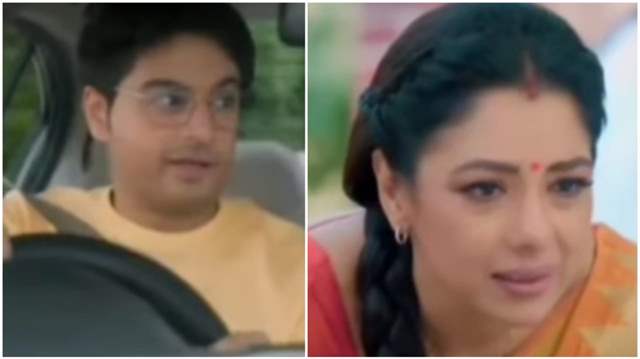 Star Plus show ‘Anupamaa’ is getting quite interesting with each passing episode. The current track of the show revolves around Anupamaa and Anuj deciding to let Pakhi and Adhik walk out of the Kapadiya house so that they can learn a lesson. In the upcoming episodes, Anupamaa gets emotional and tells Anuj that they should go on a break. Anuj plans to drop chhoti Anu to her camp location and then go on a small vacation. It is established that Anuj and Anu should not plan the trip.

Pakhi and Adhik talk about the incident and Pakhi continues to be rude and snooty but Adhik tells her that she is at fault and shouldn’t blame Anupamaa and Anuj. At Shah house, Vanraj lashes out in anger but Leela and Kavya try to calm him and tell him that Pakhi needs to learn a lesson.

In the morning at Kapadiya house, Anu tells Ankush that Barkha instigated Pakhi and they should now leave the house. Ankush agrees and apologizes for everything. Anu and Anuj get emotional. Adhik comes there to take Pakhi’s stuffs and learns about Anu and Anuj’s small vacation. Adhik requests Anuj for salary in advance and a few days leave to figure out his house. Pakhi gets furious on learning about Anu’s trip and curses her. She refuses to stay at a random rented apartment and states that she has already decided where she needs to stay.

Anupamaa gets stressed on the way and Anuj calms her down. They drop chhoti Anu and leave for their trip. Their car gets stopped by a jeep leaving them shocked.