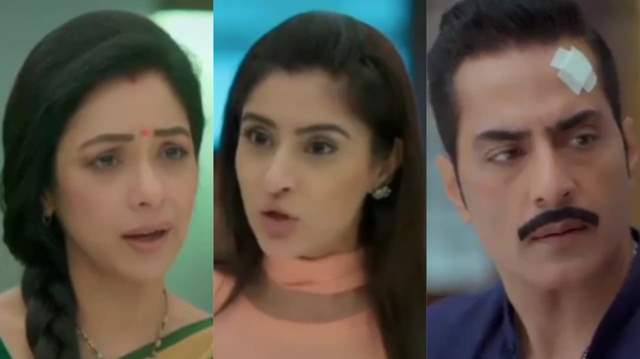 Star Plus show ‘Anupamaa’ is getting quite interesting with each passing episode. The current track of the show revolves around Anupamaa and Barkha being at loggerheads. Barkha wants to take advantage of Anuj’s health and claim her rights over the Kapadiya empire while Anupamaa is stern that she’ll manage everything well.

In the upcoming episodes, Barkha and Ankush knit a plan against Anupamaa. They aim at hurting her and breaking her spirit. Barkha and Ankush have met a lawyer and have been discussing a law procedure. Barkha states that it is Anuj’s birthday but she will give a gift to Anupamaa.

Anu talks to little Anu and talks about Anuj and Kanhaji’s birthday. Barkha enters and tells her that she wants to install CCTV cameras and Anu agrees. This leaves Barkha fume in rage as she didn’t get her desired reaction from Anu. Anu thanks Barkha for the idea as she can keep an eye on Anuj even while cooking. Barkha gets agitated and shouts at the nurse but Anu takes her side and states that she is doing her job diligently.

Vanraj wishes to meet Anu. He imagines little Anu blaming him for Anuj’s condition. He wakes up and family members arrive. He states that he wants to meet Anuj but Leela tells him that he shouldn’t visit him. Vanraj thinks that he will meet Anuj next day.

Furthermore, Anu gets Anuj ready for his birthday. Barkha gets Vanraj arrested while Anupamaa gives out a stern warning to Barkha.