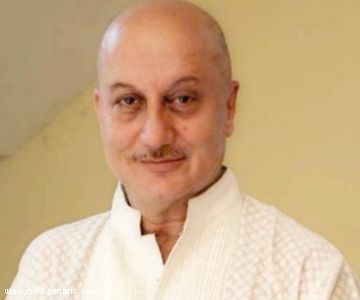 It's a celebration, not mourning, said noted Bollywood actor Anupam Kher, who was here along with his family to pay a tribute to his late father Pushkar Nath Kher.

His father died died Feb 10 in Mumbai after a brief illness. He was 84.

The actor, who spent his early days in Shimla, reached here Tuesday night with his family, including his mother and brother Raju. They sprinkled the ashes of Pushkar Nath all over the town, especially his favourite places.

"My father lived a full life. Me and my bother decided to celebrate his last journey by visiting and spreading his ashes at places he visited the most," Kher told IANS Thursday.

On Wednesday, the family visited places like the Mall road, the coffee house there and his residence in Nabha House locality. They also went to Tattapani, some 70 km from here, known for hot water springs and religious activities for the immersing the ashes.

"For him it was a sacred place, the place where he worked, lived and enjoyed every moment of his life. We could never bid adieu to him without bringing his ashes here," said Raju Kher, who is also an actor.

At a function organised by Anupam Kher at the Gaiety Theatre here, he said said the last words uttered by his father were: "Live life."

"This function is a celebration of life and not mourning of death," said Anupam Kher.

Both brothers grew up here.

Recalling his childhood, Anupam Kher said: "My father was an inspiration for me. I started acting in plays as a child. Even at that time, I was a superstar in his eyes."

"When I failed in the class X exam, my father took me to Alfa restaurant (in Shimla's Mall Road) and celebrated it by treating me to mutton samosa, espresso coffee and a pineapple pastry. This was our routine family outing, but once in six months," Anupam said.

Local theatre artistes, who once shared stage with Anupam Kher, remembered Puskhar Nath as a down-to-earth person, who was always proud of his son's achievements.

"Puskar Nath will always be remembered for the excitement he used to show when Anupam's new movie was about to release," said Shimla-based artiste Sanjay Sood.

He added that at the beginning of Anupam Kher's career in Hindi films, Pushkar Nath, who worked with the state forest department, used to carry posters of his films like "Saransh", "Karma" and "Arjun" and would loved to show them to his son's friends and fans.