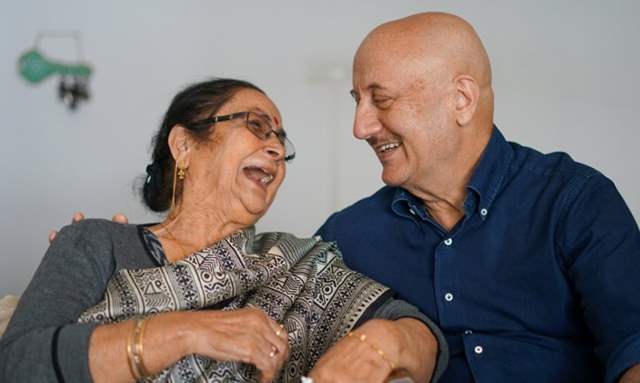 Actor Anupam Kher took to his official Instagram handle and penned an honorary note for mother Dulari who raised him with her values. The actor shares an adorable relationship with his mother and it has caught the attention of a popular Instagram Page Humans of Bombay.

The 65-year-old actor recalled important lessons that she's taught him over the years and revealed how they've shaped him into the person that he is today. Kher shared a few pictures and videos from his personal collection and shared them with the hashtag, 'Dulari rocks'.

Reminiscing his growing up years and the values his mother instilled in him, Anupam recalled some precious memories.

He said, "I have vivid memories of Mom dropping me to school. Before leaving, she’d say, ‘Your best day is today.’ And as a kid, I believed it. It helped me dream; made me forget how poor we were. Papa only made 90 Rs. a month, so Mom had to sell her jewellery to put us into good schools. But I was terrible at studies, so Mom was worried. If Papa was lenient, she’d say, ‘Zyada tareef mat karo’; she wanted to keep us focused."

The ‘Saaransh’(1984) actor who came arrived in Mumbai to be an actor with Rs 37. He would even sleep on the platform at times but never told his mom. He also mentioned that they both tried to protect each other. Anupam revealed that his mom kept him grounded from all the stardom after he started doing films. “No matter how high you fly, always be humble,” added the actor.

Previously, Anupam Kher had taken to his Twitter handle to announce that his mother Dulari, brother Raju, sister-in-law Rima and niece Vrinda have tested positive for coronavirus. He later updated his fans about his mother’s health while it does make one nervous when their family is diagnosed with the deadly disease, his fans’ support has also helped him stay strong and positive.