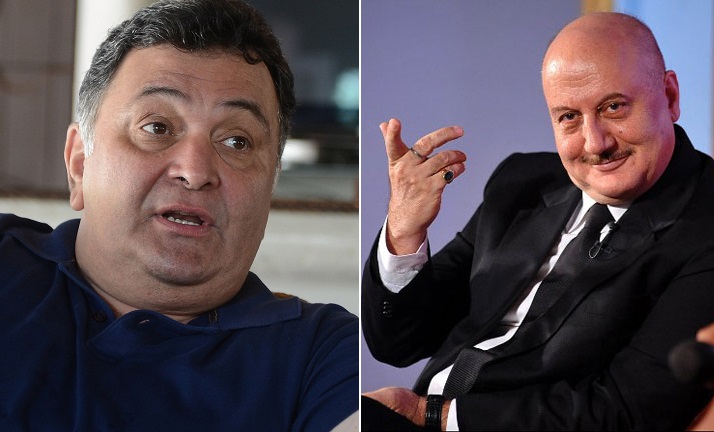 Veteran actor Anupam Kher on Wednesday supported his colleague Rishi Kapoor's views on going beyond political names while naming important assets of the country. He says instead of tracing political motivation in the remarks, one should take his statement seriously.

The actor, who has time and again expressed his views in a brazen manner, stressed on the importance to recognise "legends" of other fields like arts, cricket and cinema. He also lauded the present Narendra Modi government, saying that they don't 'have any yojna (scheme) after any political leaders".

While talking to news channel Times Now, Anupam said: "I am not surprised. I am happy that he said it. At least somebody as senior as Rishi Kapoor ji thought about it...I am sure a lot of people think lot of things...But puting it on social website needs a lot of courage. It needs not only courage but genuine thought. I think its very important."

In a series of explosive tweets, Rishi deprecated the fact that previous Congress governments have named important assets of the country after the Gandhi family. He says the present government must consider renaming the assets after those who have contributed to the society.

Supporting his views, Anupam said: "I think Rishi kapoor's statement should be taken very seriously as a very seasoned actor of our country, who has entertained millions of people all over the world in the last 30-40 years."

Rishi had tweeted: " We must name important assets of the country who have contributed to society. Har cheez Gandhi ke naam? (Why everything in the name of Gandhi?) I don't agree. Sochna log! (Think people!).

In the same vein, Anupam also shared that: "I think it is important (to appreciate) achievements from many other people from India whether it is the JRD Tata, Lata Mangeshkar, Sunil Gavaskar, Dhyan Chand...they have kept the flag of India flying on such a big level.

Appreciating Rishi for raising the topic, the "Saransh" star said: "He has made a very important point and I am sure that media has picked it up because its important to be inconsiderate about other people. In that reference I would like to say that the present government doesn't have any yojna (scheme) after any political leaders."

He also feels it is important to honour other legends for their contribution in their own respective field.

Anupam said: "Rishi Kapoor, who is a very forthright person and he has not necessarily said all the right things but why should we attribute a reason behind it and demean or sort of make it less important by immediately coming to a conclusion that this is a political statement. It is not a political statement."

On its part, the Congress reacted to Rishi's comments by saying people were targeting the Gandhis "to get into the good books" of the ruling BJP.