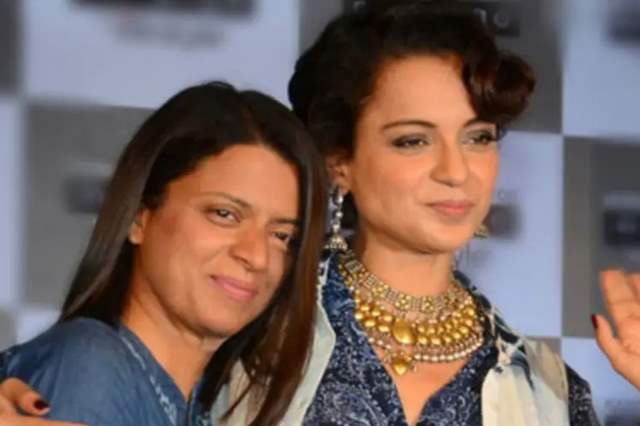 Things certainly seem to be a concern for actor Kangana Ranaut right now where she once again finds herself in some legal issue. The magistrate court in Andheri, Mumbai on Thursday  ordered an inquiry against Kangana Ranaut and her sister Rangoli Chandel for allegedly posting provocative social media posts against a community.

The order for this inquiry was passed on the basis of a complaint filed by advocate Ali Kaashif Khan Deshmukh. he advocate had asked the court to take cognizance of the matter and initiated an inquiry against actor Kangana Ranaut and her sister Rangoli.

In the written complaint, advocate Deshmukh stated that both "Rangoli and Kangana are highly influential, powerful, famous persons with millions of followers and admirers worldwide, need not mention their subsisting top-notch political contacts".

"Both the accused are together known for raising unnecessary controversies every now and then - be it allegations against actor Hrithik Roshan, Aditya Pancholi or even against the big media groups including the respectful journalist and also many other hard-working people from the Bollywood industry."

It further read, Accused have now stooped cheap low and have indulged in unlawful illegal and criminal acts willingly by maliciously spreading and promoting enmity between different groups on the grounds of religion and doing acts prejudicial to maintenance of harmony in the country by the way of mysteriously and spitefully posting frivolous, derogatory and defamatory posts with the intent to outrage religious feelings of a class by insulting its religion or religious feelings."

The Andheri court has ordered an inquiry under Section 202 of the CrPC and has sought a police report on the allegations against them. The next date for hearing in the case is December 5.

If one would remember, an earlier instance had the Bandra magistrate court order the police to register and FIR against both the sisters and sent summons. However, the sisters replied through their advocate Rizwan Siddiquee that they were busy with the marriage of their brother and would not be able to come down from Himachal Pradesh. They sought some more time to appear before the Mumbai police.

Video: Kangana Ranaut lashes out at Uddhav Thackeray over ‘Namak ...

phadukaran a month ago talk about the silencing of the voice and FOE, yet no one has guts to stand tall against such hypocrisy.