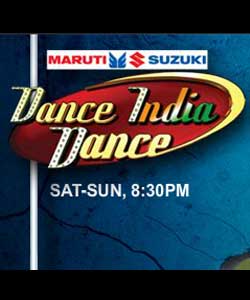 Zee TV's Dance India Dance Season 3 is picking up on the TRP chart.  After the Top 18 been declared more than two weeks back, the elimination process has finally begun.

A source says, "This week the axe will fall on three contestants from the show wherein Hardik, Radhika and Shafir will be shown the doors. Last week Grand Master Mithun Da had given a chance to Hardik and Abhik to save themselves after which they had to perform on a one minute track.  It was decided that  one of them would be eliminated this week based on that performance. Finally Mithun Da decided to eliminate Hardik from Remo Ke Rangeeley this week. And also maintaining the normal elimination procedure, Ridhika and Shafir from  Geeta Ki Gang will also be eliminated."

This week was not only bad for the eliminated contestants but also for the host of the show Jay Bhanushali.
"After Paul and Urvashi's foot tapping waltz performance on the popular track Tere Naina from the movie Chandni Chowk to China, Grand Master Mithun Da suddenly proclaimed, "My star… my Jay (Jay Bhanushali)."  When he tried to climb the top of a car there came a sound of a cloth tearing. When he realized that his trousers are torn he was left transfixed at one spot.

Jay managed to go backstage under Geeta Ma's (Geeta Kapur) pallu after which he changed and returned.

kamit 8 years ago yaar please dont give away the names of eliminated contestants it really spoils the suspense and show...

-Lazy- 8 years ago i remember jay was in jhalak dhikla ja and he performed very well.Then why they show jay like pathetic in the show that he cannot dance in order to make it funny.
all dancers are very good.and mostly girls and boys are beautiful and cute.

thisistas 8 years ago omg i thought he got hurt or something but i can't wait to see this aha & im glad abhik was saved, i feel bad for hardik though..

.m.a.r.y.s.i.o. 8 years ago oh hardik is gone...all the best to the emiminated contestents in future...oh god jay ko kya hogaya