View Profile
With Bbuddah - Hoga Terra Baap ready to be releasing on July 1st, the producers of the film are getting the first teaser of the film ready for the audiences. The surprise factor comes from the claims that Amitabh Bachchan's famous "angry man" image is going to be brought back with the teaser! 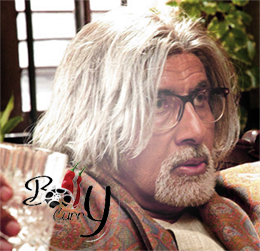 inary campaign for this film that will force everyone to take notice. Working together, the team is coming up with a teaser that will concentrate on Big B's "angry young man" avatar, which will then lead to him singing a line from the title song.
The print teasers that are being prepared are going to use the silhouette of Big B along with dialogues, signature styles and images from some of his most hit films such as Deewar, Agneepath, Shahenshah, and Hum. Eventually, this will all lead to the look that Amitabh will be donning in Bbuddah - Hoga Terra Baap. The final look was released on May 16 while the teaser will be released during the IPL match between Rajasthan Royals and Mumbai Indians.
The main idea behind this campaign is to cash in on nostalgia for Big B's iconic image of past decades, since the audience hasn't seen him in such a character in a long period of time. In the film, Big B will be seen as the angry not-so-young man, who is nonetheless young at heart.
Want to see what your parents mean when they talk about this fiery persona Mr. Bachchan portrayed to perfection back in the day? Check out Bbuddah Hoga Terra Baap on July 1st at a theater near you!