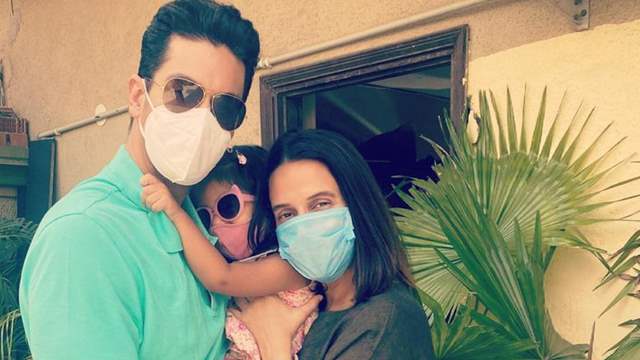 Actor Angad Bedi had tested positive for Covid-19 and had to stay away from his wife Neha Dhupia and daughter Mehr as he isolated in a different place.

After 16 days of isolation, Angad had tested negative and reunited with his family and shared an endearing video as he hugged his two and half year old daughter Mehr.

Speaking of his Covid-19 battle, Angad called it a ‘challenging time’ and shared that explaining to her daughter the reason behind his absence was the biggest challenge. He told  Hindustan Times in an interview:

“It was difficult to be away from them and be in two different places in the same city. Mehr is just two and a half, and she doesn’t understand why her father cannot come and see her. These are emotions that just break you.”

He also shared a heartwarming conversation with his daughter Mehr as he asked him why he was not meeting her.

“She doesn’t get it. There were a couple of times where she would ask, ‘Papa, why are you not coming to see me?’ I’d say that I’m not feeling too well, but the minute I said that, she’d be like, ‘But I’ve also been unwell in the past, and been with you’. Such innocent questions that a child always has... it was difficult for her and very difficult for me.”

However, Angad says that his time in isolation helped him to introspect and called it a ‘life-changing experience’.

The 38 year old actor, who is still feeling a “little weak” after his Covid battle urges all citizens to get vaccinated.