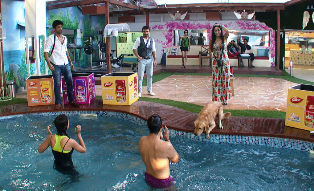 Captain of the 'Bigg Boss house' is undoubtedly the most coveted title and the one person who has been deprived of this title for the past 10 weeks is Andy.

Celebrating the success of the completion of the task, Bigg Boss announces that the housemates should nominate two contestants who have been the best performers in the luxury budget task. The selected people should also be the ones who have actively participated in the house work. They have to then write the names and put them in a ballot box. When the votes are counted, it is revealed that VJ Andy and Gauhar Khan have received the maximum votes.

Bigg Boss then announces a task specially designed for the top 2 contestants of which, the winner will be declared as the next captain of the house. As a part of the task, 65 bottles of chyawanprash of different flavours were placed on the floor of the swimming pool. Both Andy and Gauhar will be required to get inside the pool, collect as many bottles as possible and throw them in the boxes that were kept near the pool. Each of them is allowed to choose one partner who will help them to put the bottles in the box. The person who collects the maximum number of the bottles will become the new captain of the house.

The task starts the moment the buzzer goes off and both Andy and Gauhar, jumped inside the pool and started collecting the bottles. What follows next can only be described as a stiff competition between Andy and Gauhar. So, will Andy's dream of becoming the captain of the house finally come true?

7 years ago andy is bare chested n tani partner did not have any problem?