View Profile
Finally after a long wait, Raj Kumar Santoshi's mega hit Andaz Apna Apna will be made into an animation this year.  Can't wait to see the cartoon version of Salman Khan and Aamir Khan? Well we are sorry to say that the fans of the two Khans will be facing some disappointment as the cartoons in the movie will not be resembling the actors at all. However, the story will still be the same. 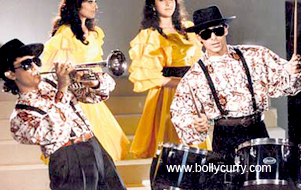 The company that is taking up the challenge of creating this animation is iRock and they have decided that the cartoons will bear no resemblance to the original actors in order to avoid any future legal hassles.
The fans who have been waiting for a remake or a sequel to the much loved film starring their favorite Khans, especially after both Salman and Aamir have admitted to wanting to work together once again, will be disappointed; however, they can still enjoy the fun by watching this animated remake of the much loved script!

While it would've been great to see an animated Salman and Aamir, it seems we'll have to make do with what we can get. What do you think?
Author: Amisha L.
Editor(s): Hershi & Gunia.
Graphics: Pooji.
0 Likes