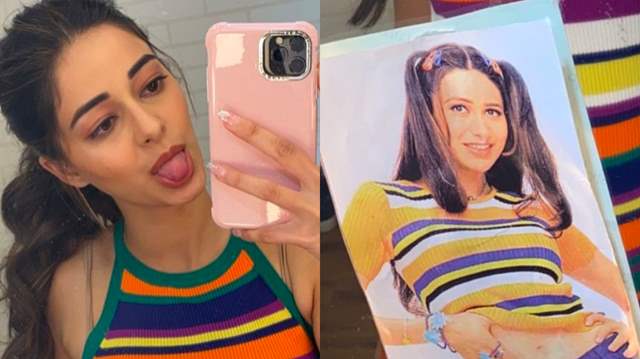 Gen-z actress Ananya Panday is currently on a promotional spree for the release of her upcoming Pan-India film Liger alongside Vijay Deverakonda. These two are leaving no stones unturned to promote their film

Well, the actress uploaded a photo of herself today from what looks to be her makeup room and the highlight of this photograph is that the actress is twinning with Bollywood actress Karisma Kapoor.

Ananya Panday took a lovely selfie in front of the mirror. In the mirror, she had taped a photo of Karisma Kapoor. Karisma was adorable, and the image appeared to be a still from one of her 1990s movies while  Ananya can be seen with a shirt that is similarly coloured to that of Lolo's.

The Liger actress pulls a funny face while wearing her hair in a single ponytail. Sharing this picture, Ananya wrote,

“BTS of #Liger twining w the forever inspo Lolo fun fact I take this picture with me on every shoot it’s a mood!!!! #Liger25thAugust.”

Taking to the comments section, Karisma Kapoor’s sister Kareena Kapoor Khan commented and wrote, “No one like OUR LOLO.” She also wrote, “So cool you look you star.”

On the work front, Ananya Ananya was last seen in Shakun Batra’s Gehraiyaan where she featured alongside Deepika Padukone, Siddhant Chaturvedi, and Dhairya Karwa. She will be next seen in Liger with Vijay Deverakonda. Made in multiple languages including Hindi, Telugu, Tamil, Kannada, and Malayalam, this Pan India movie will release in theatres worldwide on 25th August this year.

Apart from Liger, Ananya is also working on Zoya Akhtar's Ko Gaye Hum Kahaan in which she will be seen alongside Siddhant Chaturvedi and Adarsh Gourav. 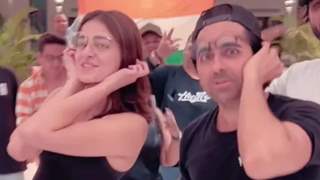