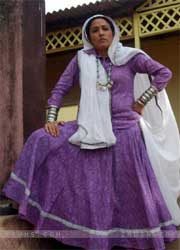 The chase is on between Ammaji (Meghna Malik) and Bhanupratap (Aman Verma) in COLORS' Na Aana Is Desh Laado. In yesterday's episode we saw Ammaji and her family trying to flee away from Bhanupratap in a truck, while the latter is chasing them in his car. The high-voltage action sequence continues in tonight's episode and to make matters worse, Sia (Natasha Sharma) who is already in labour pain gets stuck by a bullet.

Our source states, "Raghav (Aditya Redij) cannot see Sia reeling in pain and asks Ammaji to take the truck and go. Raghav says he would take Sia to a hospital for treatment. However, Ammaji tells him to leave Sia there and tells him that if it is in her fate to die such a death, then so be it. But Raghav in a fit of rage asks Ammaji to kill him and Sia along with the unborn kids so that they could at least die a peaceful death. This is when Ammaji agrees to take Sia to the hospital".

"In the hospital, the doctor tells that Sia has lost lot of blood and she has to be given blood by any of the family member. This is when they get to know that Ammaji's blood group matches. But the lady is reluctant in giving her blood to Sia. Raghav yet again pleads to save Sia after which Ammaji donates blood for her daughter-in-law", adds our source.

Meanwhile, as reported by TellyBuzz, Amba (Shikha Singh) will play a vital role in saving Ammaji's life and will also help in Sia's delivery. Amba will go on to be a person responsible for the grooming of Sia's kids.

We tried calling Meghna Malik, but she asked us to call later.

The Ammaji-Sia episode will be telecast tonight..

ananya2000 8 years ago ADITYSSSAAA..REDIJ...U R JUST ROCKSSS.. LOV U JAAAN..."Deepest" feelings of my heart while praying for you ,
May "GOD" Convert Ur
Discomforts To Comforts, Ur Pains To Gains,
Ur Minimum To Maximum,Ur Losses To Profits,
Ur Tears To Smiles, Ur Sorrows To Pleasures,
Ur Bad-wishers To Well-wishers, Ur Debts To Credits,
& Ur Good Dreams To Realities!And make these"Everlasting!...

alina_lale 9 years ago Amba is back wow
looking forward

big_vikrant_fan 9 years ago happy that amba is back.........with her there is a ray of hope in the show

-.Priya.- 9 years ago i just want rasia to stay alive in the show
n im happy that amba is back

shivani003 9 years ago If it wasnt for Raghav, Ammaji would have killed Sia long time ago. Gosh I Rasia to stay post leap!

Shaina_b 9 years ago If Amba grooms Siua's kids then they will become brave like her!!!!

"I feel Proud when I say that ours is the Platform of the ...
10 hours ago

The Dispute Between Gabrielle Union & 'America's Got Talent' ...
10 hours ago

Shekhar Kapur Appointed as President of FTII Society & ...
11 hours ago