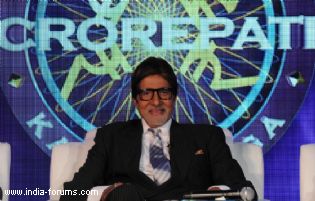 Chandigarh, Sep 21 Their mobile phones are ringing thanks to 'Kaun Banega Crorepati' (KBC), but the calls have nothing to do with millions of rupees. A prank by Bollywood superstar and show host Amitabh Bachchan has ushered in a nightmarish time for the users of 10 mobile phone numbers in Punjab.

In a recent episode, Bachchan had randomly given out a mobile number when a participant at the show pestered him for his contact.

'No sooner was the show aired on Sony TV channel than all hell broke loose for me. I have received thousands of calls in the last few days. People are calling 24 x 7 - from northeast India to Gujarat, Kashmir to Kanyakumari,' wedding planner Karan Wahi, one of those 'seriously' affected by Amitabh's prank, told IANS here.

Amitabh, popularly referred to as Big B, had given out nine digits of a mobile number (987730000) during the show, leaving viewers to guess the last one. Eager Amitabh fans did not take long to dial all digits - from 0 to 9 - in that mobile series.

Since the series belongs to mobile operators in Punjab, the mobile users with these numbers became sitting ducks for the fans who started calling.

Sony, the TV channel which airs the show, remained unavailable for comment.

Wahi, who owns two of these mobile numbers - ending with 1 and 5 - in this series, says his nightmare is unending.

Puneet Bansal, a businessman from Punjab's industrial town of Mandi Gobindgarh, 60 km from here, is another victim of Big B's prank. Jalandhar resident Inder Preet, who has two numbers in the series, is at the receiving end of constant harassment due to unwarranted calls.

Bansal is moving a court in the matter and has already slapped a legal notice on Sony TV and Amitabh.

'People are calling from Australia, Canada, the USA, London and everywhere else. I have not received so many calls in one year as I have received in the last three-four days,' an exasperated Wahi said.

Harassed by the constant calls and streams of SMSs, Wahi has slapped a legal notice on Amitabh and Sony TV.

'I am at my wits' end. I feel like committing suicide. I will seek a compensation of at least Rs.50 lakh from the TV channel and the host for this harassment and constant mental agony,' Wahi said.

'People want me to connect to Amitabh Bachchan and don't listen to my arguments. From knowing about his health to when he is becoming a grandfather, they ask everything 24 hours.

'They even want to talk to Aishwarya (Amitabh's daughter-in-law and actress) and son Abhishek. Initially, we enjoyed the calls but soon got fed up with these. Even giving choicest Punjabi abuses has failed to ward off people,' Wahi said.

His business is suffering due to hundreds of these calls, Wahi added.

The affected people have now either switched off their numbers or have started diverting the calls.

'My roaming bill has gone up by Rs.10,000 in just the last few days. What is the use of buying VIP numbers if a small joke can create so much chaos?' another affected 'victim', not wishing to be identified, told IANS.

(Jaideep Sarin can be contacted at [email protected])