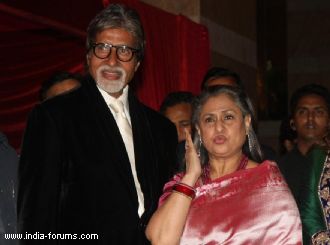 "Tomorrow I shoot for my make-up man's production of his Bhojpuri film. Jaya and I together for a day's work," Amitabh wrote on his blog bigb.bigadda.com Tuesday night.

"Deepak, my man, has been with me for 35 years and never once missed a single day of not being with me on the sets. He first started with a BR film and then remained with me since. This is the least that I can do for looking after my face for so long!!" he added.

The megastar had earlier worked in Sawant's 2006 Bhojpuri film "Ganga".

This film also marks the debut of actor Gulshan Grover in Bhojpuri cinema.

Insecurities are part of life: Raveena

Actress Raveena Tandon feels that in showbiz, insecurities are part and parcel of life.

The actress made the candid confession during an episode of UTV Stars' "Superstar Santa" while trying to mend a broken relationship of a girl and her possessive boyfriend.

The girl works in showbiz and her erratic working hours didn't go down too well with the guy.

At this point, Raveena intervened and told the girl that his insecurities and possessiveness were justified.

"Bollywood as an industry is such that insecurites are part and parcel of life!" said the actress, who has been in Bollywood for over two decades.

Filmmaker Sohan Roy, whose "Dam 999" missed out on getting an Oscar nomination, is set to move on with his next production venture "Saint Dracula 3D".

"Saint Dracula 3D" is about a powerful king of Romania, who has a very ordinary human side to his personality. If the conventional portrait of Dracula shows him as blood thirsty, "Saint Dracula" portrays him as a human being thirsty for love.

The Dracula in the film is someone who is loved and worshipped by the women of his land. He sacrifices his immortality for a woman he loves and hopes to marry.

The film will be directed by Rupesh Paul and BizTV Network will produce it.

Kasautii Zindagii Kay 2 actor Akash Jagga: Not heard anyone ...
an hour ago

Sushant’s sister Shweta Singh Kriti shares a video of a fan ...
an hour ago

Saath Nibhana Saathiya 2: Devoleena Bhattacharjee and team ...
an hour ago