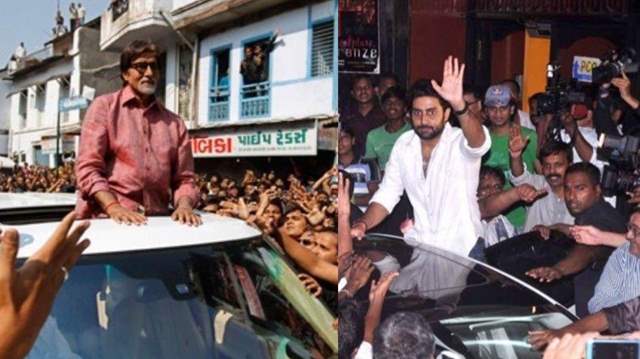 Amitabh Bachchan has never missed a chance to prove that he is a doting father to Abhishek Bachchan. He has always been a devoted figure, who is frequently seen supporting him.

Amitabh has always set large parental goals, serving as both Abhishek's support system and his biggest fan and Sr. Bachchan is a proud father for all the right reasons. To be noted, Amitabh often refers to Abhishek as his "uttaraadhikaari" in a loving manner.

Along the same lines, Big B has shared another post on his Instagram account for his uttaraadhikaari, and it is just heartwarming. He shared a collage of two photos. In one of the pictures, Amitabh was surrounded by supporters as he stood in a car. In the second, Abhishek was encircled by a large crowd of supporters. Amitabh seemed immensely proud of the moment.

In the meantime, Big B has a number of projects in the works. Ayan Mukerji's mythological fantasy drama Brahmastra, which also stars Ranbir Kapoor, Alia Bhatt, Nagarjuna Akkineni, and Mouni Roy, will feature him. He will also appear in Ganapath for a cameo role, starring Tiger Shroff and Kriti Sanon in the lead.

Abhishek was last seen with Yami Gautam and Nimrat Kaur in Dasvi. The OTT-released movie was successful in winning over viewers' hearts and garnering positive social media reviews. Abhishek's subsequent appearance will be in R Balki's movie Ghoomer. In addition, Abhishek will return for Breathe: Into The Shadows' upcoming season.

+ 8
2 months ago that’s so sweet. no matter what the audience thinks of him, amitabh thinks he’s great and that’s a compliment no matter how you twist it