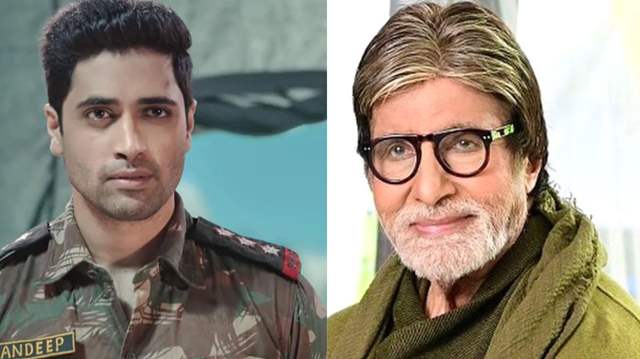 Adivi Sesh's Major has become a box office success. Several accolades have been bestowed on the actor for his depiction of Major Sandeep Unnikrishnan in the biographical action flick. And now, Amitabh Bachchan, the man himself from Bollywood is the latest to jump on board. Big B congratulated Adivi Sesh and expressed his best wishes.

Amitabh Bachchan took to his Twitter handle and penned,  "#Major a film on the life of #MajorSandeepUnnikrishnan He is one of the saviours of Mumbai 26/11. In theatres now. @[email protected] My best wishes .."

Overwhelmed by this gestures, Adivi responded to the tweet as he penned, "This is huge. The Legend Himself. Thank you so much sir! #IndiaLovesMAJOR." Meanwhile, Adivi Sesh recently also met the director Sekhar Kammula  at his residence in Hyderabad and they had a discussion about the film. A picture of them also made waves on social media.

Major has received applaud from crowds, critics, and celebrities alike. Following the film's massive success, the cast and crew, as well as producer Mahesh Babu, gathered for a round table interview. Major has portrayed the late Sandeep Unnikrishnan's life wonderfully. The film depicted the decorated NSG Commando's life from boyhood until the tragic occurrence in which he gave his life in the 2008 26/11 Mumbai attack.

This film, helmed by Sashi Kiran Tikka, was also shot in Telugu and Hindi at the same time. Sobhita Dhulipala, Saiee Manjrekar, Prakash Raj, Revathi Nair, and Murali Sharma all played pivotal roles in the film. The soundtrack for the film was composed by Sricharan Pakala and was produced by Sony Pictures Films India in collaboration with Mahesh Babu's GMB Entertainment and A+S Movies.

+ 3
1 months ago All the best for the film adivi

+ 10
1 months ago That is a nice gesture by Amitji. Happy for Adivi