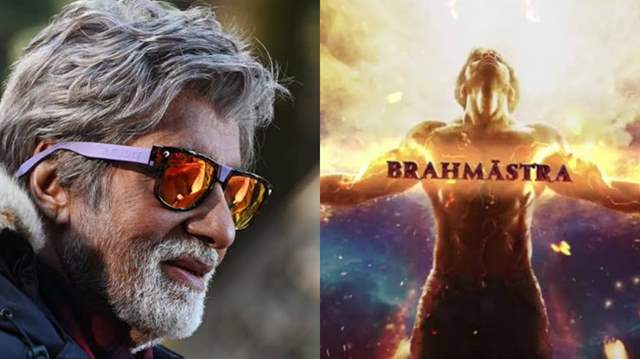 Bollywood veteran actor and superstar Amitabh Bachchan have given his fans a sneak peek into the world of 'Brahmastra' by sharing a video where Ranbir Kapoor is seen engulfed in fire.

Big B wrote, "T 4128 - Our journey of sharing Brahmastra with the world is finally beginning! Love .. Light .. Fire .. Brahmastra Motion Poster out tomorrow ..'

It has Big B's voiceover introducing Ranbir Kapoor as Shiva from the film while a shirtless RK makes a fiery appearance, right in the middle of burning fire.

Also, Ayan Mukerji has also been sharing BTS pictures and stills of 'Brahmastra' with his fans on Instagram. One of his posts read,

''TheTimeFeelsRight. Two and a half years ago, I started this Instagram journey, with Brahmastra’s Release a few months away. Then, we needed more time to perfect the movie. Then, I fell off Instagram. Then, the world stopped for a while. Through all of this, every single day, Brahmastra has been ON! Growing with all the love and dedication it has needed! Waiting patiently for its Time. That Time is Here. The Time to start sharing Brahmastra. The Time to launch something from Brahmastra. The Time for ‘another’, but this time - Final Release Date! And to do it all, in a way, that’s as exciting and as special as the movie experience, we have given our lives to create! Really really soon"

The film brings together Ranbir Kapoor and Alia Bhatt together on the silver screen for the first time. Apart from them, it also stars Amitabh Bachchan, Akkineni Nagarjuna, Dimple Kapadia and Mouni Roy in key roles.

Bollywood filmmaker Karan Johar too had expressed his excitement and thrill over finally getting to share the motion poster. "Holding my breath in anticipation and folding my hands in invitation. The air seems to stand still around me, as I call out to all the fans who have waited patiently for just this moment - Join the epic trio of Brahmastra at a grand stage that we've set to introduce our Shiva."

Let us tell you Brahmastra brings together Ranbir Kapoor and Alia Bhatt for the first time.