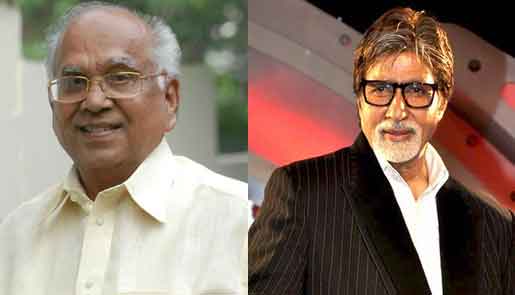 Megastar Amitabh Bachchan was conferred the Akkineni Nageswara Rao (ANR) award here Saturday for his decades of dedication to Indian cinema at a glittering ceremony at the Annapurna Studios.

The ANR award recognizes film artistes whose body of work has made a lasting impact of outstanding artistic, cultural and commercial significance to the field of cinema.

"It is privileged to be part of this industry. It is stalwarts like ANR who has given the film industry dignity, respectability and grace. Because of people like him that the industry survives," Big B said in his acceptance speech.

"It is a moment of great pride for entire Akkineni family. By accepting the award Amitji has given the award its fullest recognition and made it even more precious.Amitji's graciousness has brought tremendous motivational significance, both symbolic and high degree of prestige for the Award," Nagarjuna said.

Telangana Chief Minister K. Chandrasekhar Rao and union Parliamentary Affairs Minister Venkaiah Naidu graced the occasion in the presence of many distinguished guests from the industry along with the entire ANR family members and numerous fans of ANR.