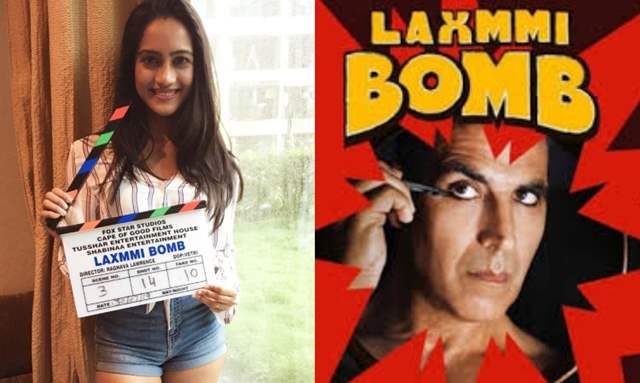 Akshay Kumar’s Laxmmi Bomb is making a lot of noise for all the right reasons. Written and directed by Raghava Lawrence in his Hindi directorial debut, the film is a remake of the Tamil movie Muni 2: Kanchana and stars Akshay Kumar and Kiara Advani in lead roles.

Khiladi Kumar is all geared up to play the role of a lifetime: a transgender in this movie. Laxmmi Bomb was initially scheduled to release in theatres on May 22. However, due to the Coronavirus pandemic, it took the OTT route and will premiere on Disney+Hotstar.

Actress Amika Shail who is currently known for her portrayal of Vayu Pari in SAB TV’s ‘Baal Veer Returns’ television series will also be seen in Akshay Kumar’s Laxmmi Bomb in a pivotal role. We got in touch with Amika for an exclusive chat where she revealed details about her character in the film, shooting with Akshay Kumar and more.

Amika is a trained singer and first appeared on ‘Little Champs’ reality series at the age of 9. She then explored her singing career and sung for the Mahie Gill-Nana Patekar starrer Bollywood movie ‘Wedding Anniversary’.

Sharing details of how she bagged her role in Laxmmi Bomb, Amika tells:

“I started as a singer and later realised that I could try my hand at acting as well. I was auditioning for TV serials and bagged my first acting assignment in the Colors TV series ‘Udaan’, after which I featured in Star Plus series ‘Divya Drishti’. I was not auditioning for films but one day a casting director informed me that there are auditions for a special character in Laxmmi Bomb. He told me ‘I am putting your name as an option and if you get shortlisted, we will get back to you.’ Fortunately, I was shortlisted and then I auditioned in front of Raghava Lawrence, who is the director of the film and I got selected for the part.”

When asked her about the character she is playing in the film,

“I play the character of Akshay Kumar’s brothers’ girlfriend in the film” Amika reveals. Tusshar Kapoor plays the brother. The singer turned actress shares “It is a very interesting character and I got the chance to scare screen space with Akshay Kumar as he is also a part of the sequence in the film.” However, Amika adds that she did not get the chance to shoot with Kiara.

Speaking of shooting with Akshay Kumar, Amika tells us:

“Akshay sir is very down to earth. He was always on time on set and it was such a wonderful experience working with him. We had lunch together and we chatted about a lot of things on set. I never thought I would get the opportunity to shoot with such a kind-hearted actor and it was an amazing experience.”

Meanwhile, the much-awaited film 'Laxmmi Bomb' is all set to release on Disney+Hotstar.

Check out the latest poster below:

Ayushmann Khurrana Reacts to Being Voted as One of the Most ...
53 minutes ago

Neil Bhatt talks about prepping up for Ghum Hai Kisikey ...
-21 seconds ago