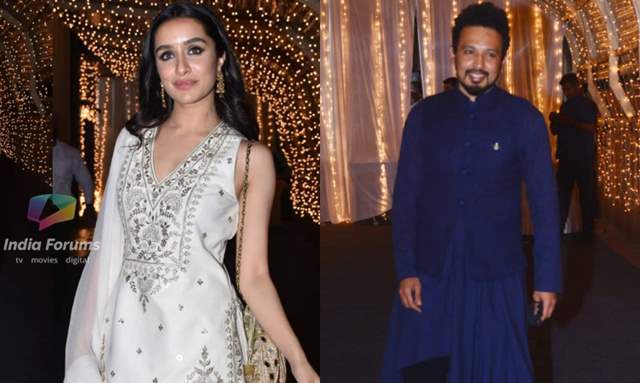 Recently, wedding rumours sparked for actress Shraddha Kapoor and rumoured boyfriend Rohan Shrestha after Varun Dhawan dropped a hint that Rohan could be next in line to take the plunge and get married.

Amid the rumours of the duo getting married, Shraddha made a media appearance with Rohan as they attended Priyaank Sharma’s wedding bash. The two were spotted together by the paparazzi as they were seen leaving the function. Shraddha’s brother Siddhant Kapoor was also seen with the couple. After the wedding functions, Shraddha and Rohan left from the venue in the same car.

Shraddha attended her cousin Priyaank’s wedding in full spirit and opted for an embellished white sleeveless kurta and a skirt with matching dupatta. On the other hand, Rohan looked dapper in a blue sherwani.

Priyaank Sharma, son of Padmini Kolhapure got hitched to his longtime Shaza Morani in a court marriage ceremony. The couple also hosted a party for close friends and family members. Celebrities like Anil Kapoor, Shakti Kapoor, Juhi Chawla among others were also spotted attending the party.

Meanwhile, speaking of Shraddha and Rohan’s relationship, the duo is rumoured to be dating each other for many years. While none of them have confirmed their relationship publicly, they are spotted together in intervals.

Recently, after wedding rumours made noise for the duo, daddy Shakti Kapoor had also reacted to the speculations and stated that he “shall always stand by his daughter." He also added that he will not have any objection but said that Shraddha hasn’t talked to him of any plans of marriage.

Also Read: Dad Shakti Kapoor on Shraddha Kapoor-Rohan Shrestha’s wedding rumours: I will not have any objection