View Profile
Ameesha Patel and Sanjay Dutt are known to be so close that the actor has more than once been overheard referring to the former as his little sister. But Munna Bhai's overprotectiveness seems to have gotten him in trouble as things turned sour at Rohit Dhawan's (son of David Dhawan) sangeet ceremony in Goa. 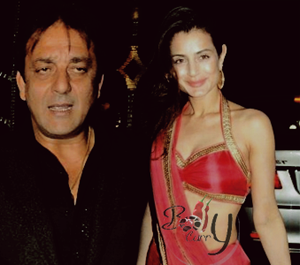 Apparently Ameesha arrived at the event in a chaniya cholli with a very revealing neckline. Sanjay, finding the outfit improper, asked Ameesha to cover up. When she ignored him, he attempted to drape her dupatta around her shoulders which left the actress fuming and was later even heard accusing Sanjay of touching her inappropriately.
Apparently Sanjay and Manyata Dutt were so taken aback with Ameesha's reaction that they left the event quickly after and returned to Mumbai the very next day, missing the wedding itself.
The actress has since denied her rash words but there's no denying that Sanjay is furious with her for how she behaved.
Extreme over-reaction or something else? What are your thoughts?!
Author: Nabila K.
Editor(s): Aradhna & Gunia.
Graphics: Zunni.
5 Likes