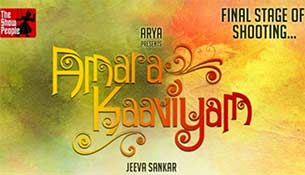 Actor Arya, who has turned producer with the forthcoming Tamil romance drama "Amarakaaviyam", was moved to tears after watching the film at a private screening recently.

Featuring Arya's brother Sathya in the lead, "Amarakaaviyam" is directed by his best friend Jeeva Shankar.

"I was amazed with the final output of 'Amarakaaviyam'. Jeeva Shankar and Sathya have recreated a romantic tale that will match international standards. I was so touched that I wept. I know and understand the pressure of a hero, but this is the first time I felt the pride of producing a good film," Arya said in a statement.

An overwhelmed Arya ordered 143 cakes and distributed them among the film's unit and close friends.

"(The number) 143 is the symbolism of 'I love you' and it instantly struck me to choose this number," he added.

What if the stadiums are empty, the IPL madness moves to social media ...