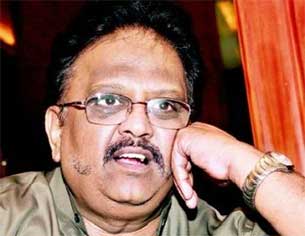 The singer took to the stage at the ongoing Indian International Film Festival of South Africa (IIFFSA) Saturday.

Balasubrahmanyam was there to receive the Outstanding Achievement in Indian Cinema Award as well as perform at the function.

"He was invited to South Africa to receive the award as well as perform. He didn't face any health-related problems there. He is doing fine and has urged all his fans to not believe in rumours," Harnath, the 68-year-old's manager, told IANS.

On Sunday, rumours had surfaced that Balasubrahmanyam had difficulty in breathing after he finished performing at the function.

At the fest, Balasubrahmanyam-starrer Telugu drama "Midhunam" was also screened. He had accompanied the film's director Tanikella Bharani to the screening.

IIFFSA, a multi-city event which started Jan 17, will conclude Jan 23.

Priyanka Chopra praises Sonu Sood as UNDP confers him with ...
25 minutes ago