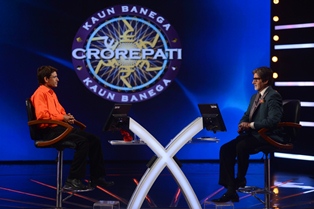 The first contestant to come on hot seat is Vijendra Pratap Singh from Allahabad (UP). He works as a junior clerk in a government office and desires to become the prime minister of India as he wants to create a change feels that it will be possible only by being in a high post.

He believes that politics has immense potential and feels that with honestly and hard work things will surely change for the better. Honesty and discipline is what takes a person ahead in life. AB says that there is phrase used by the Allahabadi people which is  itne se rahe gaye warna mukhiya mandri ban jaatey'. Vijendra wants to earn money so that he can afford to buy a laptop for his children. He is also the union leader in his office and works for the rights of the employees. Vijendra also shares that he indulges in some acting and stage performances occasionally . He dedicates a poem for the show. In the audience a special group of people who have haemophilia- a disease where the blood does not clot have come.

AB says they are the special guest and are here to create awareness. Vijendra gifts AB Akshva' (300 Grams of rice as mark of shagun). Vijendra request AB to come to Allahabad as it's been a while he hasn't been there to  which AB replies that that's where he have grown up and it's a place which is close to his heart so he would like to visit soon.