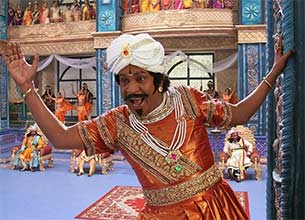 Telugu fringe groups that were against the release of Tamil period-comedy "Thenaliraman" have reached an amicable agreement with the film's makers. They have withdrawn their case against the film, which will now have a smooth release Friday worldwide.

A couple of weeks ago, Telugu groups alleged that the film portrays King Krishnadevaraya in poor light. Following the allegations, the makers clarified that their film only features fictional characters.

"We have decided to withdraw our case against the film because we found nothing objectionable in it after watching it. We will not stop the release of the film," Jagadeswara Reddy, Telugu Yuvasakti Association president, told IANS.

"We were only concerned that a popular Telugu king Krishnadevaraya would be portrayed in poor light. But after watching the film, we are convinced that our emotions won't be offended. That's why we agreed to withdraw our case," he added.

Taapsee Pannu: Will ‘break all ties’ with Anurag Kashyap if ...
36 minutes ago

Bigg Boss 14: Kavita Kaushik shuns reports of being a part ...
55 minutes ago