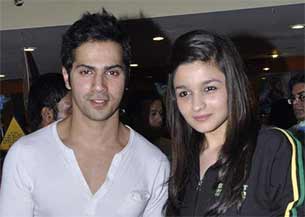 "The film is a complete filmy love story," Alia Bhatt told reporters at the launch function.

Also, the film is tribute to "Dilwale Dulhania Le Jayenge" (DDLJ) and Karan, who had a small part in the 1995 blockbuster as Shah Rukh Khan's character's fan and also assisted director Aditya Chopra, says every filmmaker wants to have at least one frame of DDLJ in their film.

But Karan clarified that Shashank Khaitan's directorial venture is not a copy of Shah Rukh-Kajol starrer.

He said: "I was the assistant director with DDLJ. I have the best memories with this film. It ('Humpty...') is an epic love story and it's not a copy of that film. It's a different film and I feel every filmmaker wants to have at least one frame in their film from the beautiful film DDLJ."

The event started with an act by Varun who is looking for his 'dulhania' (bride) and Alia makes her entry with the traditional 'band, baaja and baraat'.