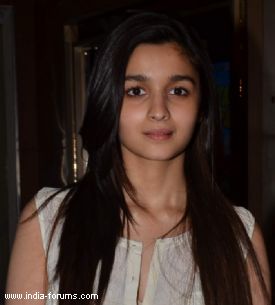 It seems the excitement and exhaustion of the past few weeks have finally caught up with young Alia Bhatt. This weekend the petite but ostensibly tireless scene-stealer was down with an exhaustion-induced fever.

Said a friend of the actress: "Shooting 'Highway' was emotionally and physically gruelling. Alia has been promoting 'Highway' extensively all over the country."

"Even before the film was released properly, she was already promoting her next film '2 States'. And that wasn't all. She was also shooting nights for Shashank Khaitan's 'Humpty Sharma Ki Dulhaniya' and simultaneously dubbing for '2 States'. All of this multi-activity proved too much for 20-year-old girl."

"She has been advised to rest it out. She's a livewire and cannot rest easy. You won't find Alia in the same place for more than five minutes. But for now, she's taking it easy," added the friend.