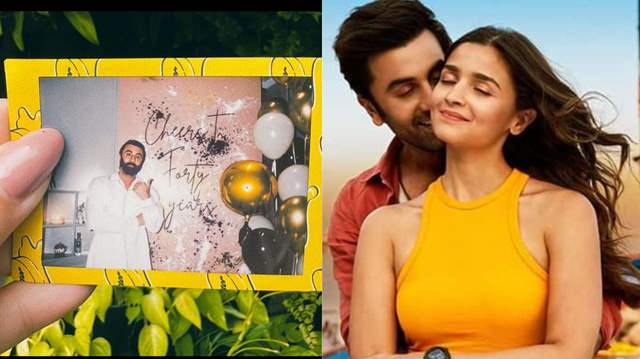 Alia Bhatt and Ranbir Kapoor are one of those fairy-tale couples in the tinsel town who have inspired many with their love story. They have been setting major couple goals since the time they were dating and then finally got hitched.

Today, Ranbir Kapoor is celebrating his 40th birthday. While all his close friends and family members have wished him on social media, fans were eagerly waiting to see Alia's post and now the wait is finally over.

Alia took to her Instagram handle and wished her hubby in a subtle manner. She shared a picture where she is seen holding an image of Ranbir with black and golden balloons in the backdrop and a text, 'Cheers to 40 years'. Ranbir is seen donning a white outfit while flaunting his dense beard look. Alia's caption read, 'Happy 40 baby'.

Every one from Ranbir and Alia's family have also extended their warm wishes to the birthday boy. Neetu Kapoor, Sono Razdan, Shaheen Bhatt, Riddhima Sahni and Karisma Kapoor all posted unseen pictures with the actor while penning heartfelt notes for him.

For the unversed, Alia and Ranbir tied the knot on 14th April in an intimate ceremony in Mumbai. They are currently in the best phase of their life as the duo will soon become parents. Alia Bhatt announced her pregnancy on Instagram and fans have been ecstatic since then.

The two are currently riding high on the success of their film Brahmastra which was released worldwide on 9th September. the film have been breaking many box office records and fans loved the VFX and plot of the Ayan Mukerji directorial.