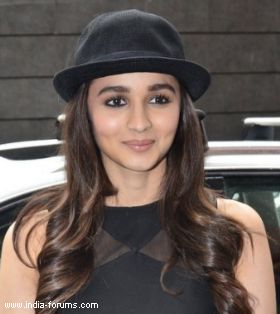 Sprightly and talented Alia Bhatt, who has sung the unplugged version of "Main Tainu Samjhawan Ki", not only wants to prusue singing in films, but also dreams of cutting an album one day.

She has corooned the song for "Humpty Sharma Ki Dulhania" and her dad Mahesh Bhatt praised her talent, saying "she is a raw and wild diamond, a wild flower".

"If I get an opportunity, I would love to sing. I really enjoy singing. But I would like to take singing forward. I wouldn't want to restrict myself to singing for films alone, I want to cut an album of my own one day," the 21-year-old said here.

Bhatt was also present in the audience. He loves the rawness of Alia's voice and hopes she never attends any formal training.

"Her unique point is being untrained. I fear people misleading her and sending her to a training school. She is a raw and wild diamond, a wild flower, which is beautiful in this way only and it should remain this way," Bhatt said.

The song, originally sung by Rahat Fateh Ali Khan, has also been sung by Arijit Singh for the film.

For "Humpty Sharma Ki Dulhania" Alia has teamed up with Varun Dhawan and their second film together hits theatres July 11.