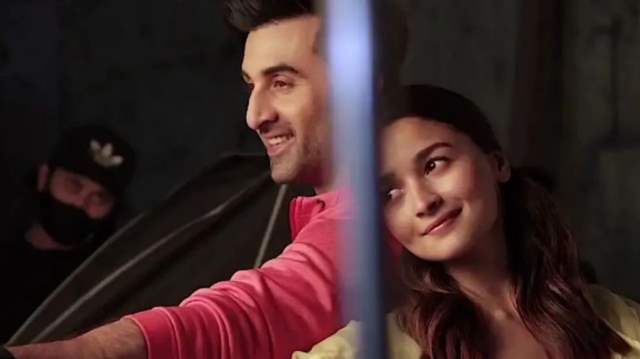 The wedding of Alia Bhatt and Ranbir Kapoor in April dominated the news for days. New pictures of Alia and Ranbir from a recent shoot are being widely shared online, weeks after pictures and videos from their wedding celebrations took over social media. The actors are seen standing together in behind-the-scenes images while filming a new commercial.

Alia and Ranbir are decked in white festive apparel as they stand in front of the camera as seen in the pictures shared by their fan accounts. Ranbir is suited casually in a red pullover and khaki pants in several of his solo photos from the ad shoot.

In several of the photographs, Alia is dressed in an orange and yellow attire. For the unversed, While Alia and Ranbir kept their relationship a secret for the first few years of their relationship, the stars have been sighted together in recent years, following the start of their first movie together.

Since their first public appearance together in 2018, at star Sonam Kapoor's wedding reception, Alia and Ranbir have piqued intrigue. Following that, Ranbir confirmed his connection with Alia on the record. The couple tied the knot on 14th April 2022, in an intimate ceremony with only close friends and family members in attendance.

However, in Ayan Mukerji's next film Brahmastra, the two will be seen sharing screen space for the first time. It will be released in September 2022 and is reported to be the first of three films in a supernatural fantasy trilogy. Aside from Alia and Ranbir, Amitabh Bachchan, Dimple Kapadia, Prateik Babbar, Akkineni Nagarjuna, and Mouni Roy also star in the film.