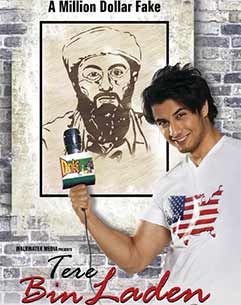 Pakistani actor-singer Ali Zafar, who played the lead in "Tere Bin Laden", will be seen in a stretched cameo in the sequel to the 2010 superhit comedy, says director Abhishek Sharma.

Popular TV host Manish Paul, who made his big screen debut with "Mickey Virus", has been roped in to play the lead.

"You will not miss Ali Zafar because he is in the film, but he is playing a stretched cameo. Only Ali could have played the role," Sharma said at a press meet Sunday.

Manish came on board because the story demanded a new protagonist.

"This was a very conscious decision by the producers. Usually producers don't want to change anything in a sequel, but my producers were open about it because they knew the story needed a new protagonist," he added.