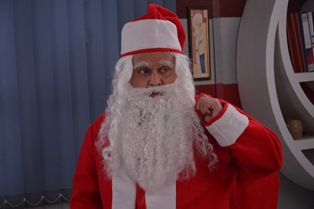 When Ali got to know that he is going to play Santa Claus in Jeannie & Juju, he could not help but share his fond childhood memories of Christmas.

Coming out straight from the horse's mouth, Ali used to eagerly await Christmas so that he can dress up as Santa Claus in the school.

And if you think this was because of his love for Christmas or Santa Claus, you are very wrong! Ali, who has studied in an all-boys Convent, used to get a chance to go to the Girl's section dressed up as Santa, which was otherwise prohibited.

"In school, we had separate boys and girls sections, and we were not allowed to interact with girls. My one point goal in school was to manage to interact with girls somehow.  And Christmas looked like the best option, as I was allowed to go to the girl's section dressed as Santa. Every year on Christmas, I used to dress up as Santa just to interact with the girls. Over the period of time, the meaning of Christmas has changed for me. I now play Santa to my daughter. Even though I don't dress up as Santa, but I do fulfill all her wishes" says Ali.

Be ready to watch Ali as Santa in Christmas Special of Jeannie Aur Juju.

Anurag Kashyap Clarifies His Image of 'Consuming Drugs'; ...
11 minutes ago