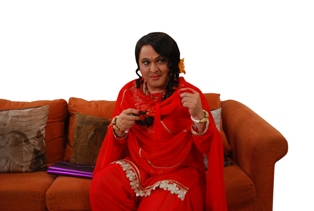 Ali Asgar, who plays the character of Vicky in Jeannie Aur Juju, will be seen playing the role of a female character once again but this time as Vicky's 'Bua'.

The audience will be in for a comic surprise to see the dual characters, performing differently with loads of humor and entertainment.

Ali, who is popular for portraying female roles, considers the transformation from one character to another quite easy. Playing a female character is not a big challenge for him.

The time and effort which goes on make-up and costume change, does not affect Ali. He reads his script and instantly adapts to any role he is presented with. It will be interesting to watch Ali as he constantly shifts between the two roles and he knows his job well.

While speaking with Ali, he said, "Bua is full of life, she is jovial, funny, loving, unmarried and lives life king size. It was a pleasant experience to play two characters simultaneously. The viewers will enjoy watching Bua, as she bonds with Jeannie and others."

Interestingly Bua's character has a connection with the fantasy world of 'Jinland' as she loved a Genie in the past. Jeannie and Jia are on a mission to find Bua's love interest from Jinland and reunite them.

sunshineglow 6 years ago Loving rubi in JAJ.looking forward for buva.all the best for Ali and rubi.

MaryamMary 6 years ago Love the show, Rubina as Jeannie is doing great...& now Ali as Bua, will be hilarious...best wishes to Rubina, Ali & all

SilverBell 6 years ago Awsome Can't Wait For This Episode.
Rubina And Ali Are Doing A Great Job In JAJ.
(:

ekta15 6 years ago Looking forward .Nice to see ruby back in a new avatar...

ashna26 6 years ago All the best.. looking forward in seeing it.

samicute 9 years ago thank for the awesome news

Mandana Karimi and Radhika Apte come out in support of ...
24 minutes ago